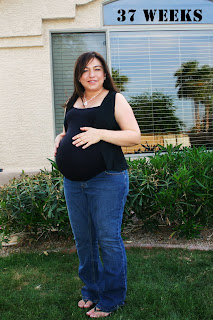 Okay, so this is me about ready to pop!  My 4th pregnancy and 37 weeks today! According to Babycenter - that is considered full term!  My actual due date is May 13th.  My three previous pregnancies I delivered at about 39 weeks.  I've been fortunate I haven't had to go past my due date.  I'm hoping this baby is about the same, if  he wants to come at 38 weeks that will be okay by me, just hope he doesn't decide to be the first to go past my due date.  I am already feeling ever so tired, swollen, achy and heavy and looking forward to feeling 'light' once again.  The pregnancy has gone by pretty fast, which I guess is normal when you have 3 other kids your looking after.  We've had two great baby shower's and I just recently finished the nursery that Alexa and this new little one will be sharing. I am also almost done packing our hospital bag. 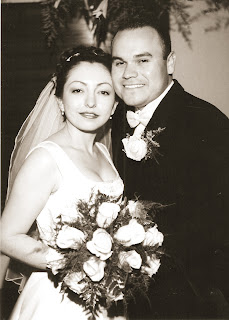 On another note, yesterday, April 21, was our:


10 YEAR Wedding Anniversary!
We cannot believe how fast time has gone by.  I remember when I was getting married I didn't comprehend how you could love the person you were marrying anymore than you did on that day {as you were obviously so in love!} but now I clearly understand it.  That is just the beginning and as time passes and you make new memories, you have children, you share in each other's lives, you see the other persons love in action, you share good times and bad times, you just fall more and more in love with that person everyday.  That is how I feel about my hubby.  I have seen him become a wonderful husband, father and even better person.  I am proud to be his wife.  He is what a true man should be.  And I am ever grateful and thankful to have him in my life, now and forever.

Okay, so after making myself cry ... sniff ...  last year we had said we would be doing something special for our ten year anniversary because we had never left our kids to go anywhere in 10 years {except hospital stays}!  In the last year, our older kids have had a couple impromptu sleep overs at cousins or grandmas house but we have always still had Alexa, hence we never did any going out.  We had agreed for our ten year anniversary and now that Alexa could communicate her needs well and doing well health wise, it was time for us to ~  GASP! ~  have a vacation by ourselves!  But as you remember in the beginning of this blog post - we are having a baby like in 2 weeks, lol!  At that time, we didn't realize this would be the case.  I can hardly walk anymore, I mostly waddle, I am so swollen I can hardly bend, I almost fell over like light post the other day and I can't even celebrate with a nice glass of wine or margarita! I sound like no fun but thankfully my hubby is still willing to take me on a 'babymooniversary'! Baby Moon's are all the rage for first time parents wanting one last hurrah before baby comes, which is what were trying to do {except with 3 kids at home} and a 10 year anniversary celebration.

So we rented ourselves a nice hotel suite!  I am so looking forward to just being in the pool {floating} so I can't feel my weight lol! and just resting by the pool, some quiet romantic dinners, uninterrupted conversation with my love, sleeping in and well ... maybe even getting this labor party started.  =)
Written by Michelle at 10:42 AM 3 comments: 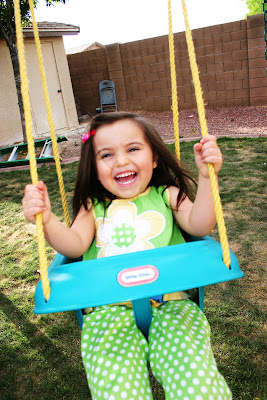 On Monday, April 18th (yesterday) I took Alexa to her cardiology check up.  Considering I am very close to giving birth (almost 37 weeks) I was really hoping for good news.  Good news to me means at least the same as last visit and no change to a negative side.

Normally it takes us about 20 minutes to get to her clinic.  Yesterday, it took us ONE AND HALF HOURS!  We along with half of Phoenix were stuck in bumper to bumper traffic because of a freeway closure (man threatenting to jump off the overpass).  I knew about the freeway closure in advance so left an hour and 15 minutes early and I was still late by 15 minutes.  I just really wanted to make it to her appointment.  I needed to know how things were going before this baby is born.

Alexa now weighs 31.9 ounces and is 35.7 inches tall!  She did awesome during her echo, she was completely still.  She was enjoying watching one her favorite movies ~ Toy Story 3 and sucking on a lolly pop.  The tech was very impressed by how well she did through out the echo.

Dr. P was in shock to see how big she has gotten.  And he had such good news to report! He told me Alexa's pulmonary pressure gradient actually read LOWER than at the previous visit 6 months ago!!! Last time it was 30 this time it was 25.  He said it could be possibly mean it was really the same number, that maybe she was just 'stiller' this time for the echo, but I remember last time she did really great too, just laying still.  So either way, if we say it's lower it's fantastic if it's the same it's still fantastic!!!  He said that her left ventricle is working STELLAR! All her heart function is great!

I only learned about one new tidbit of info - which is that she has a very tiny mitral valve leak.  He said he suspects it is nothing wrong with valve leaflets themselves but instead explained that do the location of her pacer lead as the ventricle receives the signal to contract one side is receiving the signal like a mili second sooner and so the "leaflet doors" are just closing a little off of each other like one before another so allowing a tiny bit of regurgitation.   He said this is not a problem and does not expect it to become one.  He said I probably have more regurgitation now because of the excess blood volume during pregnancy than she has going on right now.

So then he went on to check her pacemaker function.  Said he could tell she is a very active little girl! =)  He said also everything looked good and discovered that she once again has AN UNDERLYING HEATBEAT OF HER OWN!!!!  He was very surprised it came back and double checked it to be sure and it was true! Her heart is now able to beat on it's own at least 51 beats per minute.  This of course is slow but it is MUCH MUCH better than nothing!!!
I was so grateful, so happy, so relieved!  I didn't really think I could expect a visit with better than 'just the same' results but yesterday's visit proved me wrong - things can get better!!!!   So we got another six months in the clear with a 3 month pacer check call in. 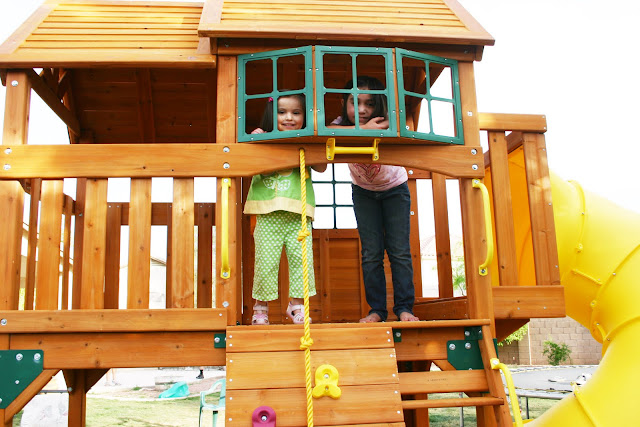